The Successful Trader’s Mindset: Thinking in Terms of Concepts Rather Than Price 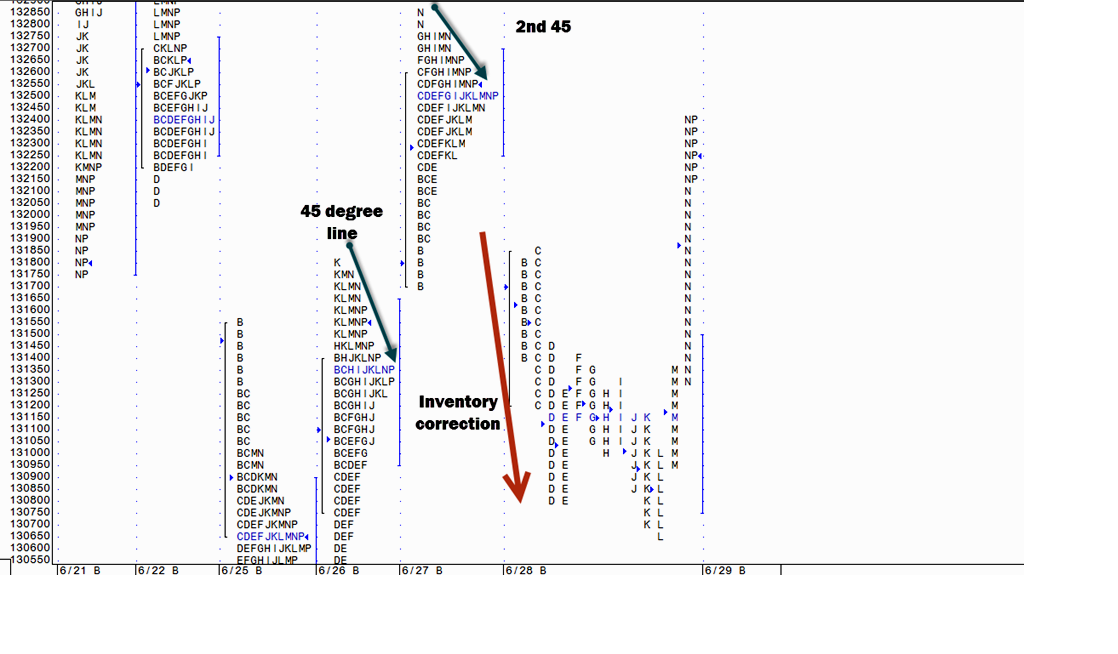 There were two back-to-back Profiles showing the 45 degree line—an indication that the market was getting too long; had you placed the short on day one, June 26th, it was far too early. The short on day two would have worked out; however, how would you have known the inventory adjustment was about to occur.  The answer is you wouldn’t have.  However, the two back-to-back days were exponentially changing the odds.  It is clear, when you listen to the constant stream of market commentary, that thinking in terms of the market being too long or too short is not common.  If you think in these terms you will better appreciate the more spontaneous nature of the market.  I started to use the word “flow” of the market however I realized that flow depicts a gentler and more constant movement.  The markets are, very often, more abrupt when change is underway.

During the constant stream of market commentary, it is also uncommon for this discussion to refer to day time frame, short-term, or intermediate-term time frames; thinking in these terms may also better condition you to be able increase your trading flexibility and separate you from your competitors. See the Crude oil example below. 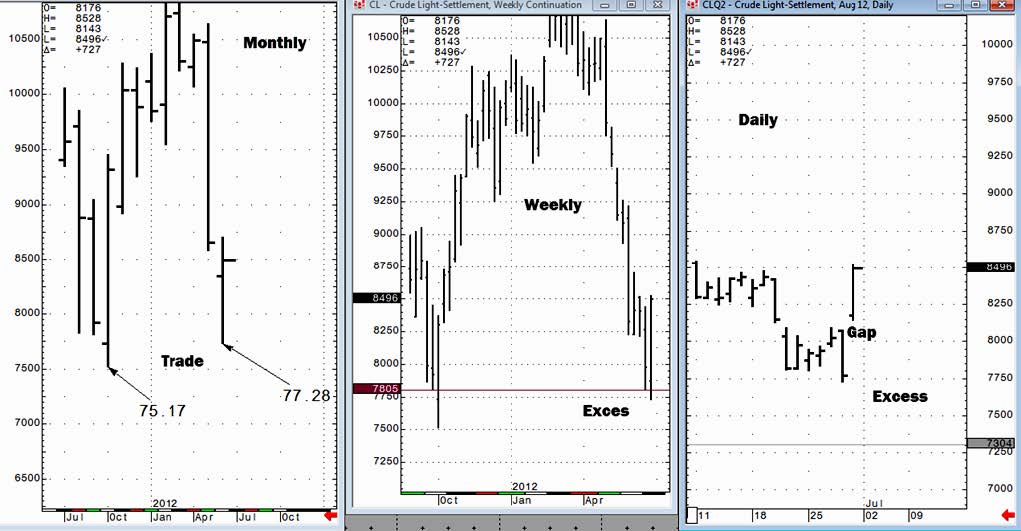 Monthly—I constantly talk about trade location and the 1st time down to significant references; the odds of a meaningful bounce are very high.  We have seen it happen enough to believe however, by the time it occurs complacency has likely set in and we fail to execute.  If we think in terms of competitor behavior we may better stay alert to both day and short-term possibilities.  For example, by the time the market gets to within striking distance of the significant reference, all traders have been conditioned to believe that selling every rally has high odds of being successful; traders do what works until it doesn’t work any longer.  This is seen most clearly on the daily bars; look at how many narrow, contained trading sessions occurred.  If you are able to think in term of your competitors’ behavior you increase the odds of being able to take advantage of the short-term trades as well stay alert to the inevitable bigger trade.

Thinking in terms of excess, balance, and gaps will also differentiate you from your competitors as well as allow you to improve on trade placement, both for entries and exits.  The monthly bar shows clear excess, an important trade entry signal; the daily bar shows lower excess as well a gap that confirms the excess on June 29th.  Let’s talk about the gap.

Hesitancy—There is, very often, a hesitancy to enter a trade; making the decision to go with a higher, gap opening often triggers this hesitancy.  Had you been thinking in terms of trade location at the significant reference and what your competitors have been doing for several weeks, you would have likely been bettered prepared mentally to embrace the gap and go with the trade; you would have most likely realized how short and complacent your competitors really were.

DESTINATIONS
Our next example and discussion centers around thinking in terms of destinations; we will use S&P 500 for Friday, June 29, 2012. 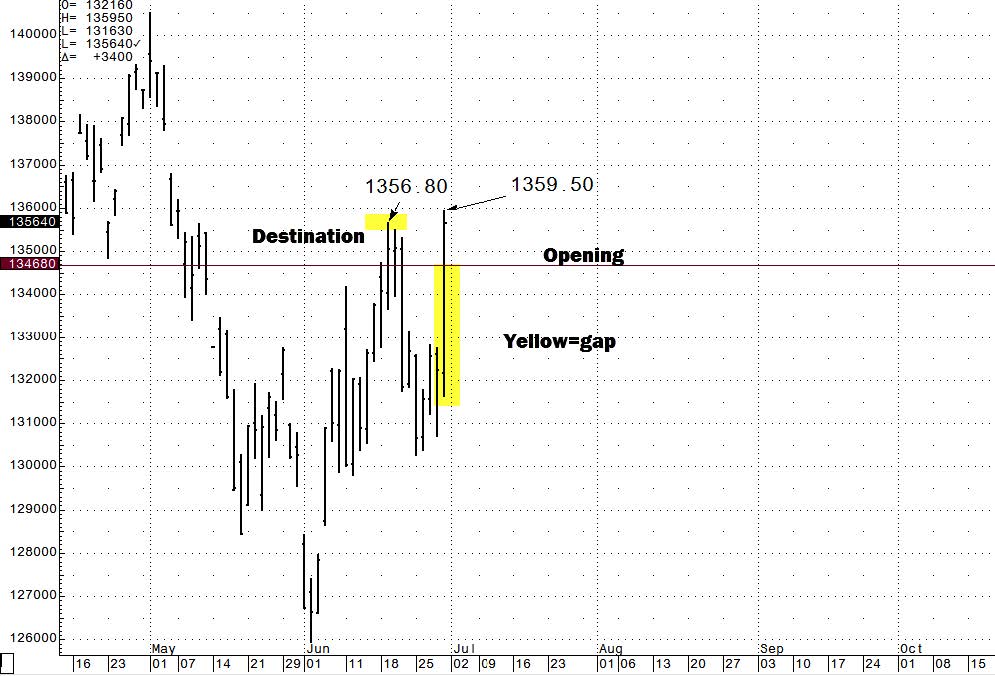 After the fact it all seems so clear to us and of course many will share with us that they saw the end result long before it occurred. In Friday morning’s S&P morning update I showed a composite Profile, its high was within 2 handles of the Friday, June 29th high.  The above bar chart also identifies the Friday’s final destination.  See the June 29th S&P morning update Profile below. The morning update was prepared about 45 minutes prior to the opening; by Friday’s settle the high on the composite had been exceeded by a couple of handles.  Thinking in terms of potential destinations can expand your imagination to visualize the possibilities.

Confession—I had visualized far enough to see the potential as I wrote the morning update; however, my mind continued to focus on an 18+ handle gap and the fact that I had sold my longs too early in the overnight market.  The fact that I didn’t execute doesn’t diminish the importance of thinking in terms of destinations rather than current prices; we are all a continual work in progress.

These were all very visual. Rather than thinking in terms of price, percentage movement, or other non-visual references, think in terms of those levels that traders can quickly see; most really good references are visual.  Our final example is also very visual. 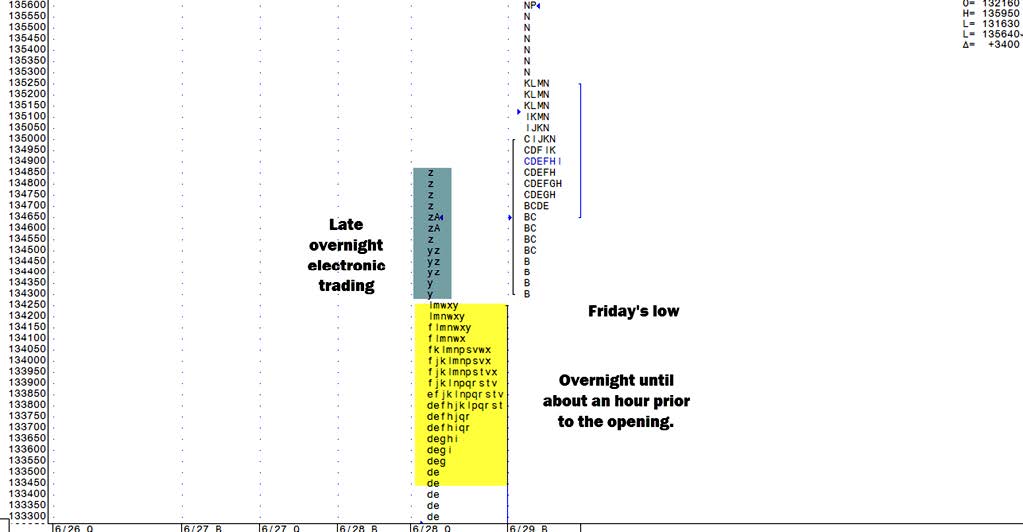 The upper electronic high highlighted in blue reflected buying interest coming into the opening and showed a change from earlier overnight trade.  Friday’s pit session low could have been identified visually based upon this overnight structure: I don’t think there was anything more complicated than the fact that the early pit session low could be seen with the overnight spike base with the naked eye.  I don’t normally use overnight structure for my pit session preparation however the late change in sentiment as the pit opening approached was an important observation; the spike in the overnight Profile conveyed this and provided a useful reference.  Thinking in terms of structure is more powerful than thinking in terms of price; structure is formed as a result of multiple data points coming together.

FINAL THOUGHTS—Impulse trading is probably the stake through the heart for most traders; price is an advertising mechanism, advertising is all about stimulating our impulses to do something.  Trading based upon a single feeling restricts our mental access to all of the more powerful concepts such as excess, balance, time frames , competitive behavior, etc.

Previous PostWhat is the Market Profile?
Next PostMisdirection