The idea for this article came to me as I was reading a book by Alex Stone, entitled Fooling Houdini.  Magic is often the result of misdirection; misdirection mostly blinds us from the obvious.  In years past I have referenced a brief film and its correlation to trading created by the University of Illinois cognitive scientists Daniel Simons and Christopher Chabris.  I would like you to watch this 1 minute 22 second clip before reading on; if you have already seen this film, please watch it again.

This experiment follows six basketball players-three in white shirts and three in black shirts-as each team passes their own ball around.  The viewers are asked to count the number of passes made by the white team.  In the middle of the film a woman wearing a gorilla suit walks on-screen, stops in the middle of the ball passing, and thumps on her chest repeatedly before continuing off the stage on the opposite side.  She is on screen a total of 9 seconds; more than half of those watching never see the gorilla because they are busy trying to complete their directive at the beginning-counting the passes.

Many of the original viewers, even after being shown the film again, still can’t believe that they missed the gorilla; have you ever been similarly amazed when, after the market is closed, you realized that you missed a great obvious trading opportunity.  Daniel Kahneman also references this telling experiment in his latest book, Thinking Fast and Slow.

For those that had already seen the video, did you notice how it was almost impossible to miss the gorilla?  You were prepared; you knew what to look for.  Consider the correlation to trading.  It’s a case in point example why, as traders, preparation-that includes at least three written scenarios-is vital to protect yourself from following price.  Being prepared will enable your mind to be open to what you may not have otherwise anticipated.  The remainder of this article discusses the theory behind the gorilla experiment and this peculiar-disconnect- between seeing and perceiving.

Further research on this experiment showed that those who saw the gorilla spent the same amount of time looking at the gorilla as those that saw the gorilla but didn’t perceive what they saw.  Just because you look directly at something doesn’t mean you will perceive it.  Misdirection or, distraction, masks the most salient information, rendering it invisible to our cognition.  In academic circles this phenomenon is termed “inattentional blindness”.  Inattentional blindness is a cognitive illusion as opposed to a visual one; an illusion not of the eyes but of the mind.  Research pointing to studies in this area has been used to suggest that hands-free devices are just as dangerous as handheld phones because they do nothing to reduce the cognitive impairments associated with phone use while driving.  In Fooling Houdini, the author went on to discuss research that argues that the high number of motorcycle accidents in the US is not because automobile drivers didn’t see the motorcycles but rather that they didn’t perceive them.

Much of what we have been discussing can be read in chapter 8 of Fooling Houdini; “How to Steal a Watch”.  Additional research behind what you will read in this chapter comes from the laboratory of Arien Mack, a research psychologist in the field of cognition. Her book, Inattentional Blindness, written by Mack and coauthor Irvin Rock, makes the radical claim that there is no conscious perception of the visual world without attention to it.

Fooling Houdini’s Alex Stone writes, “Objects and events appearing directly before our eyes, in what psychologists call the zone of fixation, frequently go unnoticed when our attention is elsewhere, as if our vision somehow stops working when we are distracted”. “…What’s more, our vision is not all that is affected. Audible noises become inaudible, simple words turn to gibberish, and even tactile sensations go unfelt when our attention wanders.”

WHERE AM I GOING WITH THIS

Most of us spend countless hours pondering what we are doing wrong with our trading, what we are missing, where do we get the necessary psychological help to be able to move forward.   I contend that many of our problems start with being misdirected by price.  Price is simply an advertising mechanism with time regulating all advertised opportunities and volume ultimately measuring the success or failure of all advertised opportunities.

To repeat Stone’s quote, “Objects and events appearing directly before our eyes, in what psychologists call the zone of fixation, frequently go unnoticed when our attention is elsewhere, as if our vision somehow stops working when we are distracted”.  Let’s go to a recent market example.  How many of you bought the lows on Friday, March 8, 2013; or were you misdirected or distracted by price.  The initial portion of the S&P morning update is reproduced below. 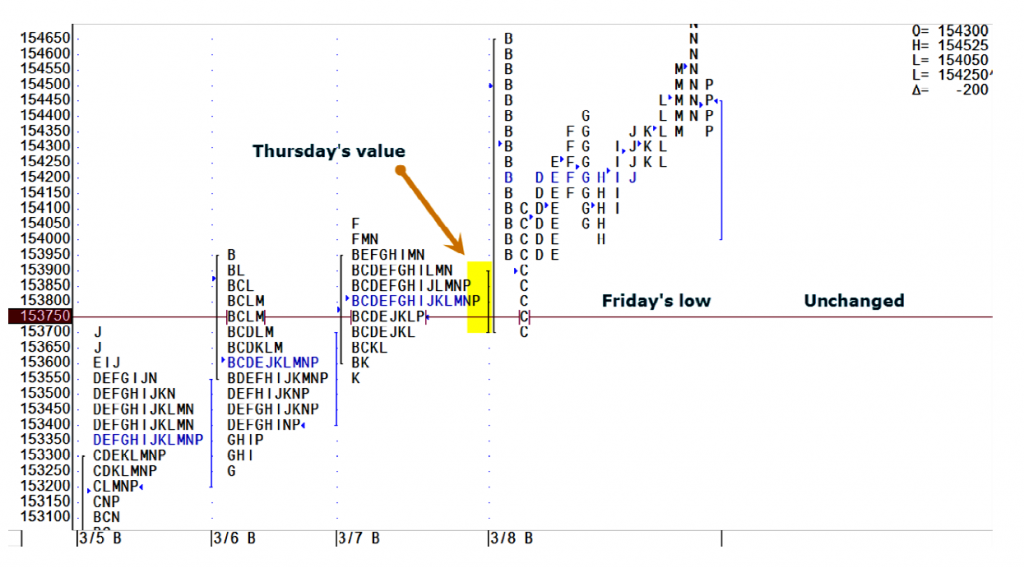 “The response to the Jobs report has been somewhat muted so far; my early focus be on the potential gap.  There is a lot of poor structure under the current level; be alert to selling into the rally.

Gap rules are in play;

The trading plan was spot on; after the opening and early trade, the market was telling us that value would very likely be higher:

If you were fixated on price it is unlikely that you took advantage of Friday’s market generated opportunity.  The noise in the early trade shakeout period could certainly have misdirected or distracted you—like watching a magic trick.  The trade was much easier to see for those who had a written plan, recorded confidence, considered the odds, and traded value.  Being cognizant of even two of these four observations may have been sufficient to see the bigger picture beyond price.

The first time I saw the video with the gorilla I was so busy counting the passes that I missed the gorilla; the correlation to trading that I failed to appreciate the first time was even more troubling.  I didn’t make the easy connection between missing the gorilla and what I was missing when I became fixated on price.  We all fall prey at some time or another to this by product of trading markets.  Yet not all of us devise a practical strategy to protect ourselves from it.

The cognitive condition that results from misdirection or distraction may be more important to our trading than we ever could have imagined.  Knowing what to look for in market-generated information and, developing the practice of consistently following our trading plan may prove to be the biggest difference between a positive equity line versus a negative one.