WHAT HAS HAPPENED BEFORE GREATLY INFLUENCES THE MARKET GOING FORWARD

WHAT HAS HAPPENED BEFORE GREATLY INFLUENCES THE MARKET GOING FORWARD

CLARITY
Cognitive dissonance occurs when what you want to do or your behavior, is counter to the information being presented to you. Cognitive dissonance, most often, stands in the way of successful trading. We invite cognitive dissonance when we are not clear on the timeframe we are trading. At Jim Dalton Trading most of our clients are day traders, with a smaller percentage willing to take trades overnight.

Personal clarity starts with appreciating the difference between day traders, overnight traders, swing traders and investors. The shorter the timeframe you are trading, the less reliant you should be on investment information, and the more sharply focused you should be on very short-term information.
From Marilyn vos Savant, who was reported to have the highest recorded IQ ever: “To acquire knowledge, one must study; but to acquire wisdom, one must observe.”  Let’s observe last Wednesday afternoon and Thursday in preparation for Friday’s rally. 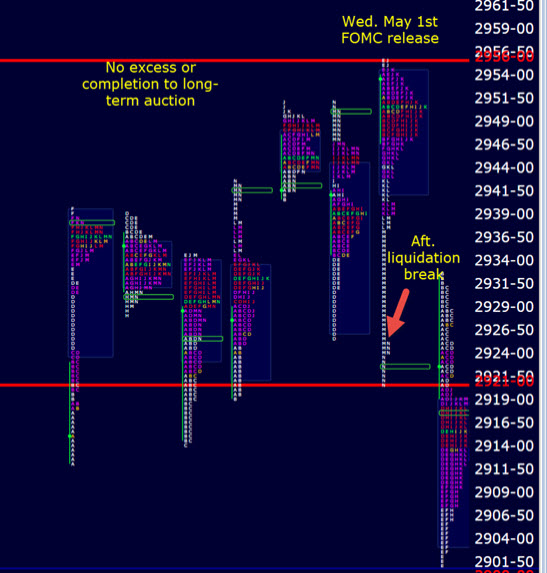 For several weeks we have observed the market continuing higher. During this advance, the market has been unable to record clear upside breakouts from traditional trading levels. This is an indication of a rally, that while not over, is getting very tired.

When rallies begin to tire it is not uncommon to observe long inventory in the hands of laggard buyers. Laggard buyers are also considered weak hand holders. Weak hand holders can be scared out of their positions very quickly. It took only a couple of keywords to trigger this liquidation on Wednesday afternoon.

I was inundated with questions regarding signs of serious selling combined with questions such as: Is this the start of a market reversal? The seeds for cognitive dissonance were sown. Wednesday afternoon’s volume suggested liquidation only versus a more potent combination of liquidation and new money selling. 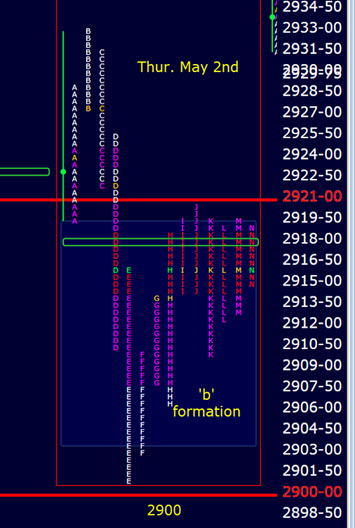 From multiple past observations, the odds were high that short-term option writers were selling naked calls for Friday’s expiration. As the VIX rallied the higher premiums would’ve attracted additional sellers. It looks like easy money – all they must do is hold through Friday.

Thursday’s formation, which looks like the letter ‘b’, represents liquidation. The two back-to-back days, both suggesting liquidation, have likely seen the reversal of short-term inventory from too long to too short. The short calls can be even more potent than short futures as the time is so limited. 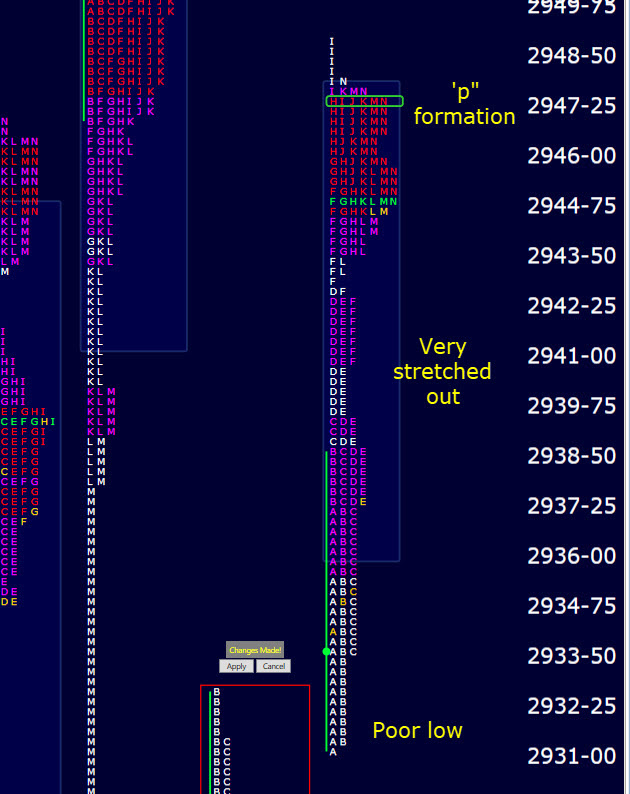 Friday’s ‘p’ formation, which is the opposite of Thursday’s ‘b’ formation represents short covering. 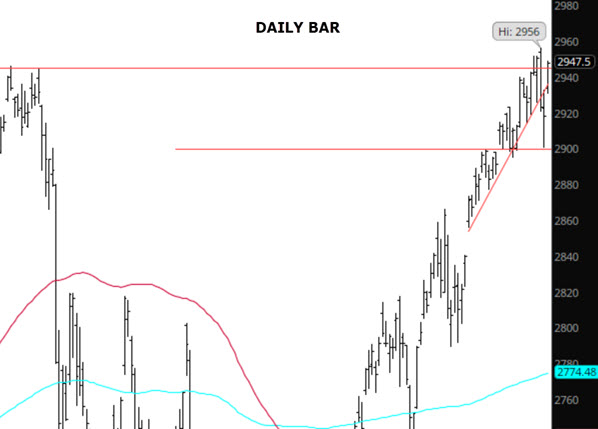 We are not trend traders; however, we don’t trade in a vacuum. Stops were triggered on Thursday morning. There are 2 types of stops. Protective stops for existing longs and new entry sell stops for those wanting to trade the downside breakout when price was not accepted back above the trendline.

MORE DISCOMFORT
More discomfort or cognitive dissonance, based upon price, was likely on Thursday morning. Another observation, that we focus on, is the relationship of overnight inventory to day timeframe trade. We have observed that approximately 65% of the time there will be a counter auction relative to overnight inventory. One of the most misleading situations occur when a short covering rally, for example, just like on Thursday morning, trades opposite to what the market wants to do on that day.

In the above discussion, almost everything was related to very short-term day and overnight trade. If you knew how to observe the market, the odds of keeping a clear perspective were high.

THE WEEK AHEAD
Thursday’s ‘b’ formation combined with Friday’s ‘p’ formation brings the market into short-term balance between the non-excess high at 2956 and last week’s pullback low at 2901.
Neither the long term high nor last week’s pullback low appeared to have been satisfactorily completed.
I have a small, short-term bias to the downside as Friday’s rally appeared to be particularly lackluster and dependent upon short covering.

May 13TH- THE NEXT INTENSIVE
If you are not already a client and want to work on combining market-understanding and self-understanding join us for the live intensive that begins on May 13th.