Insights Into Observing the Market

Morning, 8.15.2018: Markets gapped lower and sold off viciously for the first 90 minutes, dropping the Dow around 300 points, with an equally sharp sell-off in the E-Mini S&P.

At 10:20 EST I tweeted that the high was weak because it matched Tuesday’s low. The tweet was significant because the selling was probably conducted by weaker hands—short-term traders. These are the traders that often let their emotions run high, resulting in their inventory getting too short leading into a subsequent short-term recovery. Longer term traders have different motives, usually driven by patience born of longer holding periods.

How did I determine that the selling was from shorter timeframes? Longer-term traders wouldn’t have been focused on Tuesday’s low, because it wasn’t a significant reference point; their size and scope are too large to react to such relatively ephemeral indicators. Trying to execute large orders at single price levels sends an alert to other astute traders that large players are active, which would most likely result in liquidity evaporating.

Short-term traders tend to look for exacting levels, which is what occurred on Wednesday morning.

I sent out a similar tweet at 12:03 EST: “LAST HIGH–Notice that the last rally high was 3 ticks above ½ back; this suggests to me that the selling is mostly trading money rather than longer-term investment funds.” The three ticks were more relevant to the observant trader, as morning volatility had increased sharply.

The correct late-market trade, based on this discussion, was to buy the break. However, that can be an extraordinarily difficult trade to make, because you’ve seen prices fall all day! But the best trades often fly in the face of the most recent market activity.

Trading is as much about self-understanding as it is about understanding your competitors. That means developing a thorough knowledge of how you make decisions, and how different kinds of inputs influence your thought process.

The following graphic shows the late recovery mentioned above.

WAS WEDNESDAY’S BREAK OUT OF NOWHERE?

For several days we’ve held webinars and tweeted about the weak structure from 8.2.2018 (see below). 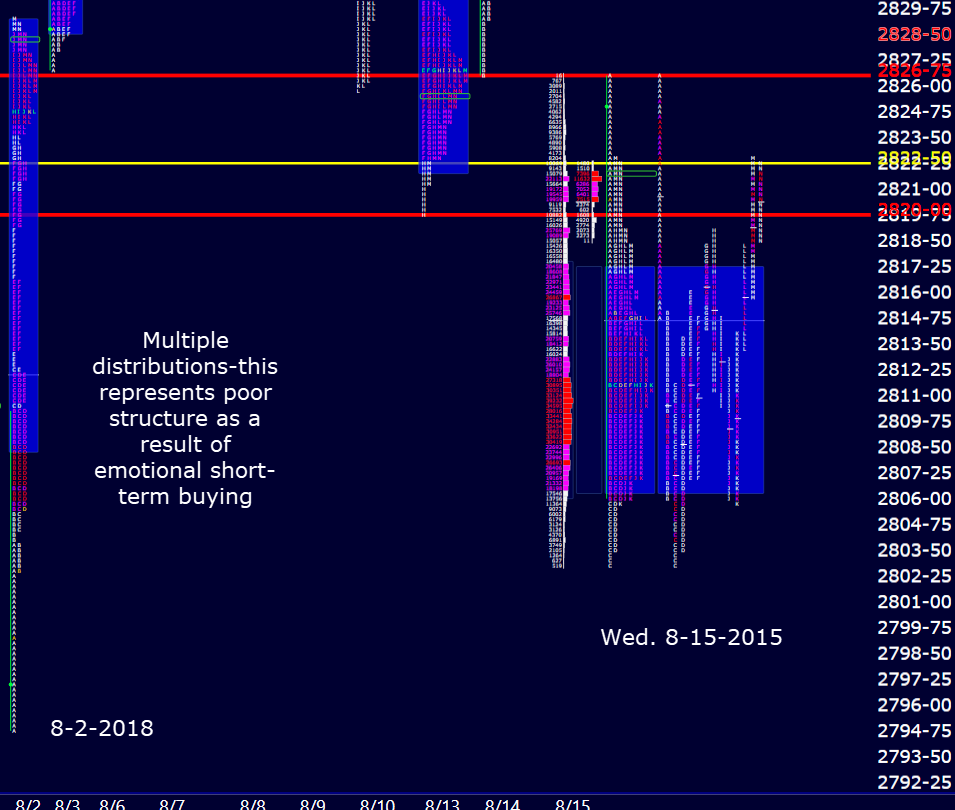 The structure on August 2 contained multiple distributions—a sign of short-term (weak hands) buying. The price momentum was strong, and continued for five days. Once it had run its course, the odds were that the poor structure from August 2 would be repaired, and with Wednesday’s break, that repair was completed.

Trading is incredibly difficult, as you can see from our discussion today. This is just a taste of what you’ll encounter as you gain experience and deepen your pattern-recognition library. Many of our recent tweets and free webinars have provided broader context for this kind of advanced market understanding.